At Daisy Olaojo’s blog, its all about gossip and more gossip!

Good Evening; Here is a summary of today’s top gist; 1. The Senior Pastor of the Daystar Christian Centre, Sam Adeyemi, has...

Daddy Freeze took to Instagram to state that Lucifer is not Satan and he blamed the misconception on the King James version of...

Killers of Vera Omozuwa must be brought to book – Pastor Adeboye

General Overseer, Redeemed Christian Church of God, RCCG, Pastor Enoch Adeboye has condemned the gruesome rape and murder of a 22...

The Lagos State Government has ruled out the immediate reopening of churches and mosques in the state.

The Commissioner for Home Affairs, Prince Anofiu Elegushi, said on Tuesday that Lagos being the epicentre of the coronavirus pandemic would not reopen worship centres until there is a “clear coast for the state to do so”.

He said this on the sideline of the 2020 Ministerial Press Briefing commemorating the first year in office of Governor Babajide Sanwo-Olu.

The Federal Government had on Monday, June 1, lifted the ban on mosques and churches in the country, based on guidelines and protocols agreed with state governments.

But Elegushi said the state was still looking at the possibility of reopening worship centres despite the FG’s guidelines.

Elegushi pleaded for continued collaboration with the State government and adherence to the government’s directives that would be presented to various churches and mosques when they are eventually allowed to gather for their services.

He recalled that the State government and various leaders of the two religious bodies held several meetings, since the index case was recorded, to agree on strategies to adopt in churches and mosques in order to guarantee the safety of their members.

He said, “Even before the pronouncement by Federal Government, we have been having meetings with the religious leaders, we even had one with Safety Commission, looking at the possibility of reopening of religious houses.

”We also had one with the leaders of the two faiths and I want to tell you categorically that at that meeting, the possibility of reopening religious houses was ruled out totally.

”They claimed that they cannot take such responsibility of ensuring that only 20 or 50 people are praying behind them.

A Food Connoisseur, Samuel Otigba, has lent his voice to the campaign against sexual assault in men.

Samuel shared his own experience on twitter on how he was sexually assaulted by his maid, female family friend, and a nanny. 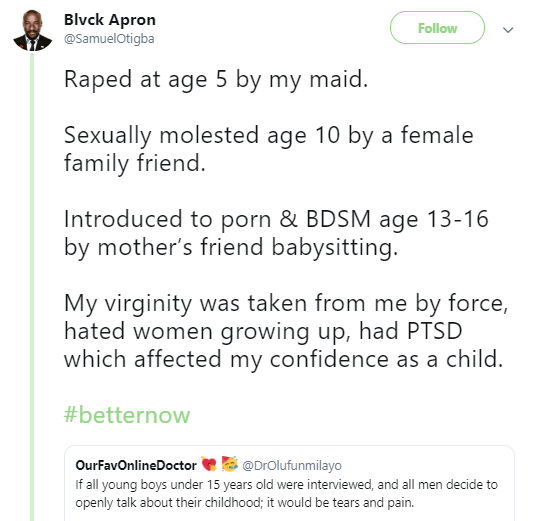 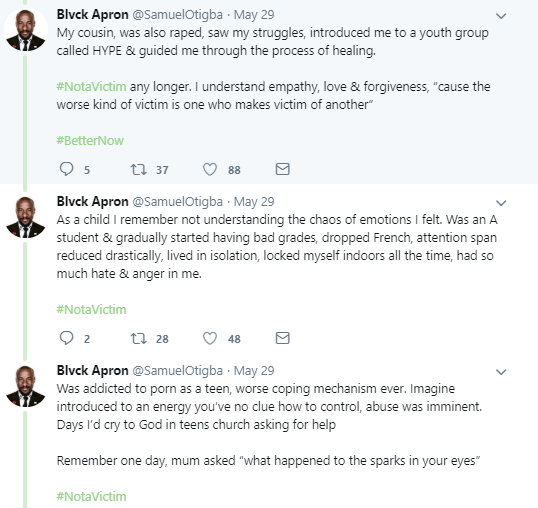 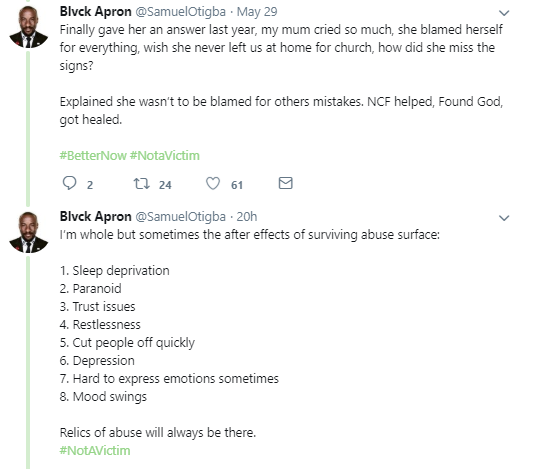 Barcelona captain, Lionel Messi, has missed a deadline in his contract to walk away from the club, Marca reports.

The Argentina superstar could have walked away from the LaLiga giants on June 1, a date he can unilaterally terminate his deal and leave as a free agent.

However, Messi chose not to trigger the clause and will now stay at the Nou Camp for one more year.

In theory, the 32-year-old will be able to speak to foreign clubs from January under the FIFA rules, but Barca will be hoping to agree fresh terms with the player.

Messi has been linked with a move away this year after he made comments about some of the senior figures at the club.

He also had a public face-off with sporting director, Eric Abidal.

Why I signed new contract with Chelsea – Olivier Giroud

Chelsea star, Olivier Giroud, has said that the effects of the coronavirus pandemic across Europe influenced his decision to sign a new contract extension with the club.

Giroud signed a new deal with Chelsea that will keep him at the West London club until the end of the 2020-21 season.

The 33-year-old striker also left Stamford Bridge in the January transfer window for Inter Milan, but Chelsea’s failure to find a replacement saw the France international stay for the final six months of his existing deal.

“I simply seized my opportunity, and I repaid the faith that the manager, Frank Lampard, had shown in me,” Giroud told Chelsea’s website on Monday night.

“That is why the club ultimately offered me the chance to continue my time at Chelsea, and I accepted because I like it here.

“I want to keep winning trophies, and I want to continue to show Lampard that he can count on me.

“Plus, with the whole coronavirus lockdown situation, I did not feel comfortable with the idea of moving abroad and uprooting my family.

“I think a lot about our quality of life and we have a great setup here.

“I think a lot about my family now.”

Five of Barcelona’s first-team players tested positive for COVID-19, but the news was not made public, RAC1 reports.

The Catalan radio station made the accusation during its program, Tu Diras.

The five players were not revealed during the broadcast, but it was claimed the positive tests came in towards the start of the crisis.

Each of the players showed no symptoms of COVID-19 and became aware they were positive after undergoing blood tests.

All five players who were affected have recovered from the virus and are now believed to be back in full training.

The legendary singer died at the age of 57.

His death was confirmed by his manager, Omenka Uzoma, on the late singer’s official Instagram page.

The post on Instagram read: “I have been having pressure calls, well it is true that the African No 1 Legendary ICON has gone to be with the LORD his Maker.

“Let use today to celebrate him, his achievements, and his family.”

He added that the public will be notified on further decisions.

The manager, however, failed to disclose the cause of his death.

Majek Fashek, started his music career in the 80s and was popular for the 1988 album ‘Prisoner of Conscience’, which included the multiple award-winning single “Send Down the Rain.”

The FCT High Court cleared Melaye of giving false information to police, as claimed by the AGF.

He was accused of deliberately accusing the ex-Chief of Staff to the Kogi State Governor, now Deputy Governor, David Onoja of plotting to assassinate him in April 2017

Melaye was accused of giving a false statement during a conversation with Mohammed Abubakar, son of Abubakar Audu, ex-Kogi governor.

In a two-count charge, the former lawmaker was accused of giving out false information with the intent of harming Onoja’s reputation.

The lawmaker, however, denied committing the offense punishable under Sections 140 and 393 of the Penal Code Law, Cap. 89, Laws of Northern Nigeria, 1963

His counsel, Mr. Olusegun Jolaawo, SAN, had filed a no-case-submission when the prosecution closed their case.

However, Justice Olasumbo Goodluck, while delivering a ruling on the no-case -submission, held that “there was no evidence that the defendant gave false information to any person in public service.”

The Judge described the evidence given by a government witness Mr. Edward Onoja as “vague and unreliable”

Justice Goodluck held that “neither of the two witnesses elicited evidence on the status of Mohammed Abubaker Audu.”

The Senior Pastor of the Daystar Christian Centre, Sam Adeyemi, has given possible reason the Federal Government lifted the ban on religious gatherings and work hours for civil servants and banks.

Recall that Nigerian Government finally lifted the ban on religious gathering across the country on Monday.

Churches are to reopen for the next four weeks spanning 2nd – 29th June 2020, and it’s subject to review.

Also, the Federal Government asked civil servants from grade level 14 and above, should to resume work daily.

Reacting, Adeyemi said the government lifted lockdown restrictions to either preserve livelihood or for political reason.

He, however, urged Nigerians to pray that coronavirus leaves the country soonest.

He tweeted, “Governments are lifting lockdown restrictions to preserve livelihoods, and in some cases for political reasons.

“We pray for the virus to be gone soonest. Till then, think with clarity, make sound decisions, act responsibly, be prayerful, and stay safe. Lead yourself well.”

Good Morning; Here is a summary of the latest gist today;

1. Ogun Sate Governor, Prince Dapo Abiodun, on Thursday, relaxed the lockdown imposed on the state to flatten the curve of the coronavirus pandemic…..readmore

2. Italy’s Serie A can resume on June 20 after a three-month absence in a country hit hard by the coronavirus pandemic….readmore

3. Eighty-seven patients undergoing treatment for coronavirus at isolation centres in Lagos State have been discharged…..readmore

5. Primero Transport Services Ltd., operator of the Lagos Bus Rapid Transit (BRT) says it has secured approval to increase its fares across all routes with effect from Friday to keep serving the people……readmore

6. Gov. Oluwarotimi Akeredolu of Ondo State, on Thursday, gave out N47.6 million as car loans to primary school teachers in the state…..readmore

7. The 2019/2020 Premier League season in England will restart on June 17, according to a media report on Thursday……readmore

8. Pastor Flogs 40-Year-Old Lady 40 Strokes Of Cane In Other To Help Get A  Husband…..readmore

10. Since March 16, Switzerland temporarily banned prostitution as part of measures to combat the COVID-19 pandemic……readmore

Since March 16, Switzerland temporarily banned prostitution as part of measures to combat the COVID-19 pandemic.

ProCoRé, which urged the Swiss government to lift the restrictions as a matter of urgency, said that the current ban was giving rise to illegal s£x work and creating safety issues.

Prostitution in the country is legal and regulated, but human trafficking and most forms of pimping are illegal.

As part of a plan to reopen the s£x industry, ProCoRé released a list of best practices guidelines earlier this month.

Under ProCoRé’s plan, sexual positions that avoid face-to-face contact, like doggy style and reverse cowgirl, are advisable. Kisses, and other face-related services, are not.

Sessions would be limited to 15 minutes and kept to a strict schedule. Rooms would be aired out for 15 minutes in between clients, and sheets should be washed after every encounter.

Lingerie would be washed with disinfectant detergent in between sessions, under the plan.

ProCoRé also recommended “wearing a mouth and nose cover” for all services.

Contactless payments would be encouraged for customers, who would have to offer their real names for a contact sheet that would be available for up to four weeks to aid with contact-tracing in case someone does get infected.

ProCoRé, in a letter to Swiss government officials, said that the negative effects of the ban on the s£x trade are “significant and serious.”

The organization hopes to get the green light for brothels to reopen when the next round of lockdown measures are rolled back on June 8.

“In the light of current developments, we do not see the need for a new restriction on trade and we consider it disproportionate and contrary to the principle of equal treatment,” ProCoRé wrote.

n related news, s£x workers in “dire and desperate” circumstances across the UK are continuing to see clients during the lockdown, potentially exposing themselves and others to coronavirus, according to charities and s£x worker organisations.

“We are facing a massive crisis,” said Niki Adams from the English Collective of Prostitutes. “No one wants to be flouting the rules and putting themselves and others in danger, but those who are still working literally have no other choice.”

On one adult website, there were 800 s£x workers across the UK “available to book” on Thursday, with approximately 150 of those in London. Adams said that many of those would not be working, but would be using the site to keep their profiles active in the hope that potential customers could be persuaded to pay for phone or cam s£x. But others had not stopped work because they had no other income, no savings or had returned to work when rent and bills were due.

While the charity’s usual focus was improving women’s futures, it was now simply trying to stop their lives becoming worse. One woman had described her fear of daily visits to the hospital to get methadone and of other people bringing infection into her hostel. She said food donations to the hostel had stopped, and when she spoke to the charity she had not eaten for days.