The legendary singer died at the age of 57.

His death was confirmed by his manager, Omenka Uzoma, on the late singer’s official Instagram page.

The post on Instagram read: “I have been having pressure calls, well it is true that the African No 1 Legendary ICON has gone to be with the LORD his Maker.

“Let use today to celebrate him, his achievements, and his family.”

He added that the public will be notified on further decisions.

The manager, however, failed to disclose the cause of his death.

Majek Fashek, started his music career in the 80s and was popular for the 1988 album ‘Prisoner of Conscience’, which included the multiple award-winning single “Send Down the Rain.”

Madonna, 61, Just Freed The Nipple On Instagram—And Has A Response For The Hater

Madonna, 61, just freed the nipple wearing a see-through bra in a new Instagram. She anticipated having some haters, writing in the caption that she “graduated from the University of Zero F*^ks Given.” Celebs like Katy Perry loved the pic, but others weren’t a fan of the photo.

Madonna has been regularly stirring up controversy since the 80s, so its hardly shocking that shed raise a few eyebrows in her 60s. The latest risqu move from Madonna ? She just freed the nipple in a new Instagram post, and theres some serious pearl-clutching happening over it.

It all happened when Madonna shared a photo on Instagram of herself sitting on a couch. Simple enough, right? Her blonde hair is mussed-up, shes wearing a see-through bra (hence the freed nipples) and black underwear, and is clutching something lacy.

Apparently, Madonna anticipated that some people wouldnt be cool with this pic, because she wrote a caption that lets would-be haters know what they can do with their negative vibes. “Current Wardrobe Sitch………………And for those of you who are offended in any way by this photo then I want to let you know that I have successfully graduated from the University of Zero F*^ks Given,” she wrote. “Thanks for coming to my Graduation Ceremony! Class of 2020! .”

Plenty of fellow celebs were here for the pic and no-holds-barred message. “Omg I just enrolled in that college!” wrote Katy Perry. “Do your thing Ma,” commented Debi Mazar. “Girl, I told them to send you that diploma years ago ( HOT AF),” said Courtney Love.

But some people werent impressed. “Cant you guys tell this pic is at least 30 years old? She looks NOTHING like this now,” one person wrote. “Ugh. Give it a rest, grandma,” another said.

Of course, Madonna has a history of not caring what other people think. There was her whole controversial “Like a Prayer” video back in the late 80s, mounting herself on a cross in her Confessions tour, and kissing Drake at Coachella in 2015, just to name a few. And she regularly shares less-than-safe-for-work stuff on Instagram like this:

Peter Hawkins, UNICEF Nigeria Representative, announced this in a statement on Wednesday.

He said that the appointment made the artist UNICEF Nigeria’s first National Ambassador in the last 15 years.

Asuquo would help raise awareness on concerns around children’s rights and solutions, including issues around birth registration, immunization, education and protection from violence.

Hawkins welcomed him to the UNICEF family, particularly on Children’s Day.

The statement recalled that Asuquo had been supporting UNICEF to raise awareness on children and youth issues.

Hawkins acknowledged his support for UNICEF Nigeria’s work since 2019, including producing ‘I am a Nigeria Child (For Every Child)’, the song promoting kids’ rights to be respected and protected.

UN added that the hit maker also produced the song ‘We go Win (Corona)’, to raise awareness on how Nigerians can protect themselves from COVID-19.

Asuquo also produced the song ‘Tell Everybody’ back in 2015 to raise awareness on the Sustainable Development Goals, as part of the UN Global Goals campaign.

Hawkins quoted Asuquo as saying it was a huge honour to become a UNICEF Nigeria Ambassador.

I Am Africa’s NUMBER ONE Barbie – Bobrisky Boasts; Lists Out Achievements

Social media celebrity, Bobrisky has come out to reveal that he is the number one cross-dresser in Africa.

The ever-controversial Bob took to Instagram where he stated in quite clear terms why no one would ever dethrone him.

According to him, anyone planning to take his throne is just dreaming. The self-acclaimed male barbie then went on to list reasons why no other crossdresser can ever compete with him.

“Who dare take my throne 👑 in AFRICA ? Whoever is planning to take my throne is dreaming 😂😂😂😂. Oh I will fold my hands and watch u sit on my throne abi Come take lessons from your boss 🙌🙌🙌🙌🙌🙌

@instablog9ja you posted someone last week ranting to take over 😂😂😂😂😂. Let me list out reason nobody of such can never compete with me 👇🏻👇🏻👇🏻👇🏻

Lastly am breaking internet on my birthday 31st August wait for it. Come learn from ur mama 🙌🙌🙌🙌🙌 I will school u for free !!!!”

The crossdresser who is most times scorned at has gone on to carve a niche for himself. His recent verification on Instagram further pays homage to the celeb he is becoming.

The 28-year-old who has asked to be referred with pronouns “She” and “Her” graduated from the University of Lagos (UNILAG).

Nigerian born London singer, Jocey Joseph Ekwuazi, popularly known as Willie XO has thrown a shade at former big brother Naija housemate, Ike Onyema, for demanding money from his lover Mercy Eke , if she wants to end things with him.

Last weeks episode of Mercy and Ike show saw Ike requesting money from Mercy saying; “If You Want To End Things With Me, Pay Me Off”.

The show also showed where Ike urged Mercy to unfollow Willie on social media, because he felt this would help their relationship move forward.

Once Ike saw Mercy’s reaction to what he had asked her to do, he realized Mercy wasn’t willing to sacrifice for him. After a back and forth between the two, Mercy finally gave in and unfollowed Willie.

Recall that in February, Mercy visited Willie in London and they both shared photos and videos of each other on Instagram, and this fueled rumours that Mercy was cheating on Ike with Willie .

Willie has now taken to Instagram to shade Ike writing;

“ Real men give babes mulla and not the other way round 🤣🤣🤣 but If na money they want o, I go give them double 💰💰 #MoneyLove ” 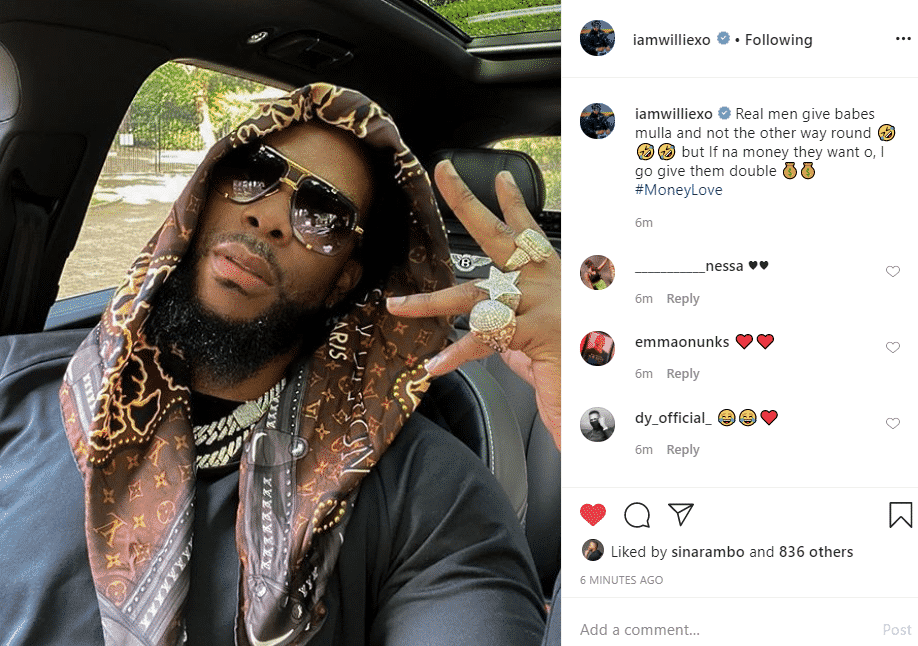 This comes two days after both parties clashed on social media over their breakup.

It also had an option to renew for two further years.

According to the terms of the contract, Cynthia Morgan and Northside Music had a 50/50 sharing formulae.

The label even agreed to drop 100 per cent of the expenses, of which 50 would be deducted from Morgan’s earnings. 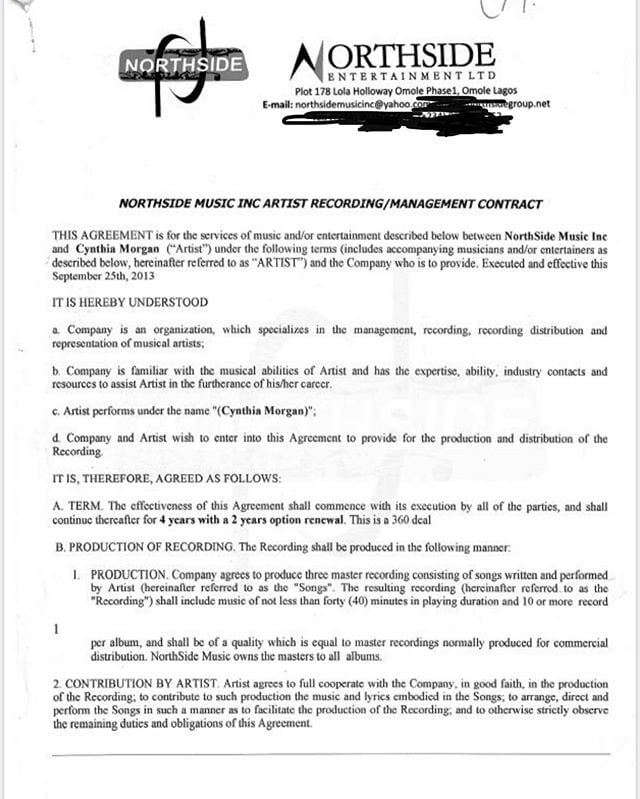 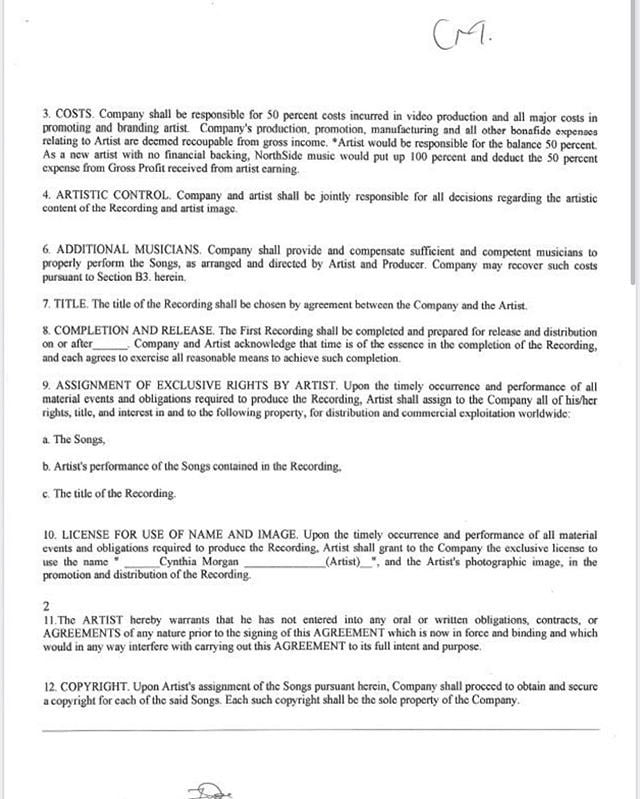 Cynthia Morgan had over the weekend claimed that she lost all she had, including her name, VEVO account, Instagram account and royalties following a disagreement with Jude Okoye over her contract.

However, Jude Okoye had since dismissed Morgan’s claims while telling his own side of the story.

Davido, in a post on Twitter had offered to help Morgan by featuring her in a new song he’s working on, despite being rude to him in the past.

But Davido’s reaction sparked a lot of reactions on social media as some accused him of being a ‘clout chaser.’

However, the singer took to his Twitter page on Monday to react to the backlash over his decision to help Cynthia Morgan.

His tweet reads: “Most important thing is that she has spoken and people are willing to help, and she will be able to rewrite her steps and have another chance.

“That’s all that matters.”

Africa’s frontline female pop star, Tiwa Savage, has said that she might have to go naked in her next musical video.

Tiwa, 40, said this in an interview with BBC, while speaking on what to expect from her forthcoming album entitled ‘Celia’.

“I might just have to go butt naked in my next video, because I don’t know what else I’m going to have to do to top that one!,” Tiwa Savage said.

“And, just to put it out there, this was done in Nigeria. All the cast is Nigerian, the director, the AP, everybody is Nigerian.”

Tiwa added she might end up shooting her next video at home using her iPhone because of the COVID-19 pandemic.

“So this pandemic has really opened my heart to the real situation of where the world is right now,” she said.

Nigerian actor, Mike Ezuruonye is disturbed at the manner at which some people have mastered the art of living a fake lifestyle.

In a video shared via his Instagram page on Tuesday, May 12, 2020, Ezuruonye gave an example of someone who hasn’t been able to pay his rent in Lagos but drives a very expensive car.

Ezuruonye joins the list of celebrities who have at one time or the other talked about fake lifestyle especially those on social media.

Other celebrities like Joke Silva, Tonto Dikeh and Funke Akindele have at one time or the other shared the same sentiment about the misconception a lot of people have about the lifestyle they see on and off social media.

Meet the mothers of your favourite Ghanaian celebrities

Millions of sweet messages for mothers have already flooded social media. These messages include the ones from Ghanaian celebrities.

Being Mother’s Day, some top Ghanaian celebrities have taken to social media to share cute and rare photos of their mothers and accompanied with sweet messages.

Here are some top celebrities who shared photos of their sweet mothers across social media.

My mom & I… Happy Mother’s Day to all mothers and would-be mother’s out there. 🙏🏽🖤🖤 📸 @urbanphlicks

God bless you for giving birth to Virgins like Us Mama 💙

Happy mothers day to my biological mother aka Agaga

I can’t imagine my world without you in it. Happy Mother’s Day Janet 💕